Hydrogen – Drivers on the Road to Climate Neutrality

Green hydrogen plays a central role in climate neutrality. Our claim at ENGIE Deutschland: We want to be at the forefront of the production of green hydrogen on an industrial scale. For this purpose, we work in the three development areas "Industrial Applications", "Mobility" and "Energy", develop innovative solutions, enter into partnerships and explore different technologies.

Your advantages through a partnership with ENGIE Deutschland

Would you like to know more about the hydrogen activities of ENGIE Deutschland?

With green hydrogen into a climate-neutral future

Green hydrogen is a key element for the energy transition. It is CO2-neutral, technically tested and flexible to use. Hydrogen can store large amounts of green energy with high energy density - a perfect complement to renewable energy. In addition, green hydrogen can be converted into many other products that would emit CO2 when manufactured in the traditional way.

The use of green hydrogen is particularly interesting for the decarbonization of industry and for sustainable mobility. And as fuel for modern power plants, hydrogen can become the backbone of our power supply in the long term.

At ENGIE Deutschland we are driving the production of green hydrogen on an industrial scale. Our objectives for 2030 are: 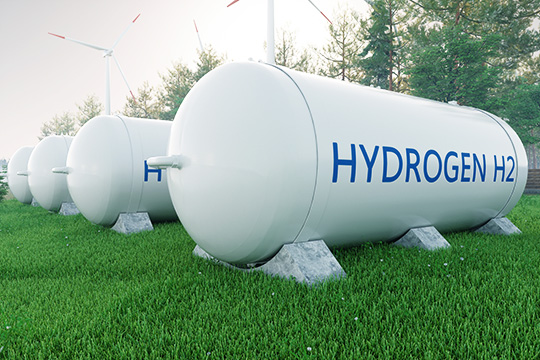 We offer services along the entire value chain of green hydrogen

ENGIE Generation is a central power plant operator within the ENGIE Group and is one of the largest investors and owners of power plants worldwide. The business model: owning and operating plants. Depending on the project, we offer different operator models:

Everything from a single source: ENGIE Generation is your investor for the entire infrastructure, your developer for the entire plant technology, your operator with its own staff and your marketer with customer relationships worldwide.

Our lighthouse projects for green hydrogen

In 2017, ENGIE joined forces with the Auvergne-Rhône-Alpes region, Michelin, the Banque des Territoires and Crédit Agricole to develop an integrated ecosystem for hydrogen mobility that combines production, storage and distribution infrastructure. Our goal: structure the hydrogen sector in the region and allow a growing number of green hydrogen vehicles at competitive prices. Zero Emission Valley is the leading renewable hydrogen mobility project in France for corporate fleets. The project, co-financed with European funds, is managed by ENGIE and its partners through the project company "Hympulsion".

For more information about this project, see engie.com/en/business-case/engie-x-zero-emission-valley.

The HyNetherlands project, which was launched by ENGIE and Gasunie in 2019 and is due to start operations in 2025, aims to install a hydrogen hub in the strategically located region of Groningen (north of the Netherlands in the Eemshaven industrial area).

At the existing power plant site, ENGIE is planning to build  in the first phase by 2025 an approx. 100 megawatts of electrolysis,  one of the largest plants planned in Europe. At full load, the electrolyzer will have an output of approximately 20,000 standard cubic meters per hour. The expected production of hydrogen is therefore about 11,800 tons per year. The plant is operated with renewable electricity from offshore wind farms in the North Sea. ENGIE and its partner Gasunie will transport the hydrogen to nearby chemical plants, which use it as a raw material for decarbonizing their production. Hydrogen will also be used as a fuel for heavy commercial vehicles and local trains.

In the second construction phase a significant expansion of the capacity  to approx. 750 megawatts of  electrolysis is planned to produce green hydrogen for export as well.

In order to ensure the future viability of the site, it is planned to expand the installed capacities to up to one gigawatt of electrolysis in a third construction phase. This goal is to be achieved by the end of the 2030s.

To reduce the CO2 footprint of its La Mède biorefinery in the south of France, ENGIE and TotalEnergies launched the "Masshylia" project. Masshylia will be the first French site for the production of renewable hydrogen on an industrial scale. Production should start as early as 2024 – an important step towards fulfilling France's ambitions for a low-carbon energy mix.

A 40MW electrolyzer will be installed at the site of TotalEnergies' biorefinery, which will draw electricity from, among other things, solar parks with a total capacity of more than 100 MW. An average of 15 tons of green hydrogen are to be produced every day to meet the plant's biofuel needs.

The project is groundbreaking in several ways: With large storage facilities and the implementation of an energy management system, it will solve the problem of fluctuating solar power production and ensure a continuous supply of hydrogen to the biorefinery. The project includes several photovoltaic parks that will optimize the power supply of the electrolyzer.

The SaltHy project of our sister company Storengy Germany is linked to ENGIE's HyNetherlands project. Storengy is the world leader in the underground storage of natural gas. In Germany, the company operates three cavern storage facilities, including one near Hamburg. The aim is to store green hydrogen in a H2 cavern storage facility at this location and to transport it to local customers from the mobility and industry sectors. Storing the hydrogen in salt caverns offers flexibility to compensate for fluctuations in production and consumption. This project makes an important contribution to the development of a European H2 backbone. The hydrogen produced in the HyNetherlands project, which is to be transported to Hamburg via a pipeline, can be temporarily stored in the H2 cavern.

Our sister company Storengy Germany launched its hydrogen solution for heavy goods traffic in 2021, including in waste management. Especially in waste logistics, a lot of energy is used for the collection, disposal and recycling of waste, which leads to the release of high emissions. The solution with hydrogen drive is conceived in an efficient cycle.

Together with other ENGIE companies, the entire life cycle of a hydrogen project can be covered from a single source: investment, conceptual design, project development and contracting.

You can find more information at: storengy-h2.de

Climate neutral into the future: Wind, sun, water – we use all technologies and support you with sustainable energy solutions.

Benefit from the many advantages of solar energy with ENGIE Deutschland as your reliable partner.

Are you planning a wind energy project? With ENGIE Deutschland it is guaranteed a success!

Good for climate and balance sheets: Decarbonization has a double positive effect